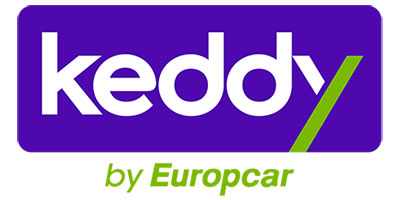 Keddy is a budget brand serviced by Europcar. Keddy is available at thousands of locations worldwide. Keddy by Europcar is serviced Europcar. Keddy provides lower rates to travelers around the world. If you rent a car with Keddy, go to Europcar counter to pickup your car. You will be serviced by Europcar staff and you will get a car from Europcar fleet. There is not a separate Keddy counter. Keddy is known for low rates and good service. Keddy operates in more than 145 countries. Most popular Keddy car hire locations are in UK, Spain, Portugal and Australia.

You can book Keddy rental cars on the website or on the app to benefit from low rates. You will get the same service from Europcar if you book with Keddy Car Hire. Most of the Keddy cars have limited mileage. Check for the inclusions or terms & conditions before making your reservation. 100–200 free kilometers will be included in the rate. You can purchase extra kilometers if you drive more than the limit. If you are not planning to drive far away, Keddy will be a lower price with good service option. Keddy car rental deposit amount varies based on country and car class booked. You can contact Keddy car rental branch for exact amount.

“Have used Keddy at Stansted with no problem. Cars from Europcar pool. Only difference is there is limited mileage and a much larger excess. As we only use the car instead of a taxi to return home for short periods and have annual excess insurance neither of these issues are a problem. Fuel policy was full to full — will not entertain anything else. Similar with Interrent which is also part of Europcar, although have just got unstuck at Heathrow as the Interrent desk is not with Europcar and I didn’t read the blurb properly so they had to send a bus out for me! Virtually brand new Fiat 500 for less than 10 pounds a day at Heathrow — don’t think you can grumble at that.”

“We returned from Italy 2 weeks ago and our experience of 3 weeks of Keddy car hire was faultless. Although we’d booked the cheapest car it turned out to be a diesel car, which even surprised the woman on the desk. There was no pressure to buy extra insurance. The car itself was smart and reasonably newish and very comfortable. In our middle week we travelled extensively and there was no issue on mileage. It did state quite clearly on what is and what is not included that for more than 5 days there was no charge on extra mileage. So far no complaint at all. We’d certainly book Keddy again if they had an offer price.”